With continuous efforts and hardwork, we’ve grown into an integrated investment solution provider with expertise in consulting, research, access services and investment incubation.

Established in 2016, Madkarter focuses on the Indian investment Services sector. With continuous efforts and hardwork, it has grown into an integrated investment solution provider with expertise in consulting, research, access services, and investment incubation. In our journey so far, we have been in business with various Chinese companies, private companies, and emerging start-ups.

At Madkarter Technologies Pvt. Ltd, we believe in facilitating clients at every step in order to succeed and establish themselves in the growing Indian market. We analyse in a detailed manner India’s social economy and the investment opportunities therein before setting up a new business.

Our experts help to devise business plans for International enterprises and liaise with them on how to effectively initiate their operations in India through a detailed roadmap study of the business. These studies are focused on empowering our clients and provide them with a clear outline on how to run a robust business plan in India while conforming to all mandated legal and licensing requirements.

2. Securing Land for Your Business

Madkarter has an extensive database that assists in identifying the most lucrative land/property for you to set up your project. We shortlist appropriate land/properties for our clients so that the process of land identification is simplified and you are shown only the best for your business set up.

Once the land is identified, we facilitate the final negotiations between the clients and the land owners so that the land lease can be signed on time and you can commence your project.

After the lease deed is signed, we also expedite the acquisition of mandatory licenses and sanctions. Some of the requisite licenses & sanctions are mentioned below:

In addition to these we also look into other licenses or permissions needed by our clients (depending on the scope of work) for them to start their businesses.

4. Setting Up Your Company

We, at Madkarter ensure that you set up your company by making use of the best industrial practices which includes provision of all the relevant & necessary tools and resources required for your business. We also ensure that you take control over your businesses operations, revenue and profit targets with a team of experts who guide you from the inception till the running of the business.

We help in opening bank accounts in India by sorting out all relevant details and documents so that you have a running bank account as soon as you travel to our country.

Setting up a business in India for an International company is time consuming and requires sectorial competence. We have experts assisting you with all mandatory registrations.

We help you with the registration of the company, acquiring PAN, TAN and GST registrations, and ensure that all procedures are followed as per the Indian Companies Act 2013.

Major Requirements for incorporation of company in India:

To start a company in India, a minimum of two persons and an address are required in India. A company at least should have two directors and minimum of two shareholders. According to Indian rules and regulations, one of the director’s should be both a citizen and as well as resident of India. In this case, 100% of the shares of the Indian company can be held by foreign nationals/ NRI. The address in India is served as the registered office of the company. Foreign companies establish their offices in metropolitan cities like Delhi, Bangalore, Mumbai and Chennai, etc.

What are the main advantages of doing business in India?

What options are available to foreign companies for entering the Indian market?

A foreign company planning to set up business operations in India has the following options:

A foreign company can begin processes in India by incorporating a company under the companies Act, 1956 through registration of company or establishing a branch or liaison office.

Starting a private limited company is the coolest and fastest way to set up in India. FDI of up to 100% into a public limited or private limited is permitted under the FDI policy.

Other entry strategy is to open a liaison office, branch office and Project Office. In this case, approval from RBI or central government is mandatory. Therefore, the time required is much more than setting up a private limited company. 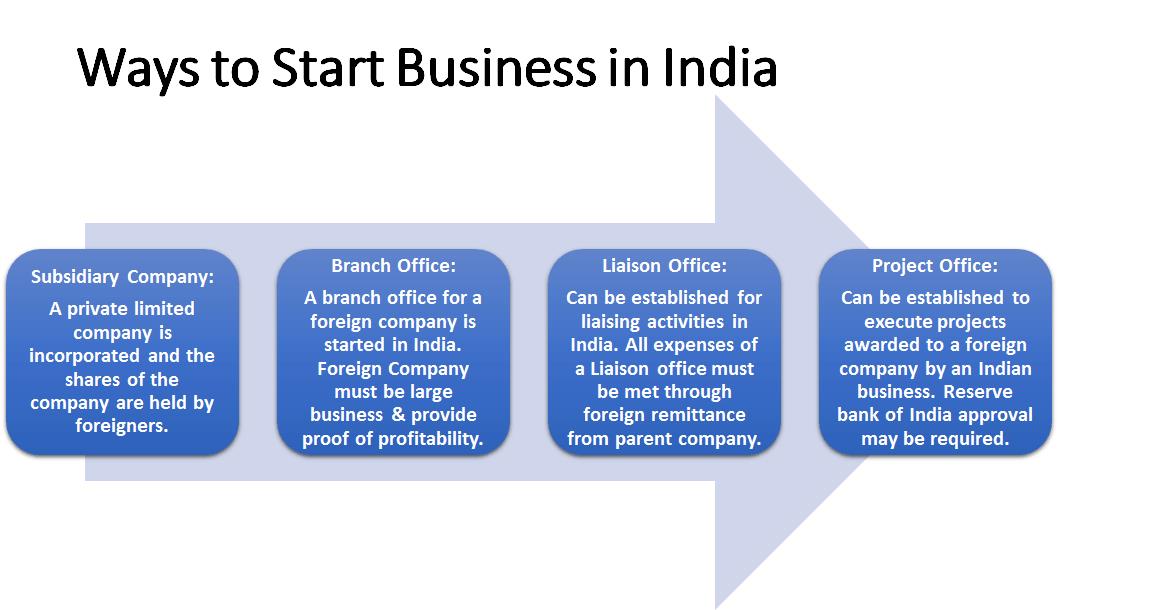 What are the types of business entities that can be set up in India? What is the process, time and cost for setting up each?

Under the automatic route, FDI up to 100% is allowed in all activities/sectors, except in some of the cases which requires prior approval of the government.

Let’s have a look at the subdivisions where FDI is not allowed in India, under the Automatic Route as well as Government Route?

FDI is forbidden under Government as well as Automatic Route for the following sectors:

FDI in activities not covered under the automatic route requires prior Government approval and are considered by the Foreign Investment Promotion Board (FIPB), Ministry of Finance. Request can be made through Form FC-IL, which can be copied from www.dipp.gov.in.

What are the next steps, once the investment is made under the Automatic Route or with Government approval?

A two-stage reporting procedure has been introduced for this purpose.

On receipt of money for investment:

Upon issue of shares to non-resident investors:

Within 30 days from the date of issue of shares, a report in Form FC-GPR, PART A together with the following documents should be filed with the concerned regional office of the Reserve Bank of India.

What procedure is to be followed for obtaining Reserve Bank's approval for opening a Liaison Office?

What is the procedure for setting up Project Office?

What is the procedure for setting up branch office?

Can a foreigner invest through Preference Shares? What are the regulations applicable in case of such investments?

Can a foreigner set up a partnership/proprietorship concern in India?

No, only NRIs/PIOs can set up partnership/proprietorship concerns in India. Even for NRIs/PIOs (Non-resident of Indian/Person of Indian Origin) investment is allowed only on non-repatriation basis.

What are the key businesses related legislations in India?

What are the regulations regarding Portfolio Investments by NRIs/PIOs?

At Madkarter, we strive to make the cumbersome process of setting up your business in a new country as smooth and hassle-free as possible. Our consultants and partners work tirelessly to ensure that the process of business incubation is both satisfactory and profitable for all invested parties.